Cast your vote for TORN FROM THE FLAG here.

The submission form has 5 questions and takes less than 2 minutes to fill out.
I bolded the two facts below that you’ll need to make it even faster.
TORN FROM THE FLAG is the first Hungarian American picture nominated for the National Film Registry. The Library of Congress is particularly interested in your nomination of a lesser-known film title.
The Library of Congress’ National Film Registry is a list of films deemed “culturally, historically or aesthetically significant” that are recommended for preservation. These motion pictures are works of enduring importance to American culture. They reflect who we are as a people and as a nation.
The National Film Registry has historically only included movies produced or co-produced by American companies or individuals, typically for theatrical release, or films recognized through festivals or awards. The nominated film must be at least 10 years old.

Oscar contender, TORN FROM THE FLAG, was released in 2007, has been screened at 21 film festivals, and won eight awards. It was also invited to and presented at the United States Congress, and was entered into the Congressional Record. The President and the Prime Minister of Hungary awarded the documentary with the Hero of the Freedom Fight Award.

TORN FROM THE FLAG (A lyukas zászló) is about the Cold War, the international decline of Communism, and the 1956 Hungarian Revolution. According to several critics and historians, the documentary is the “most comprehensive chronicle of the Hungarian uprising yet caught on film” and “the best documentary ever made” about this topic. 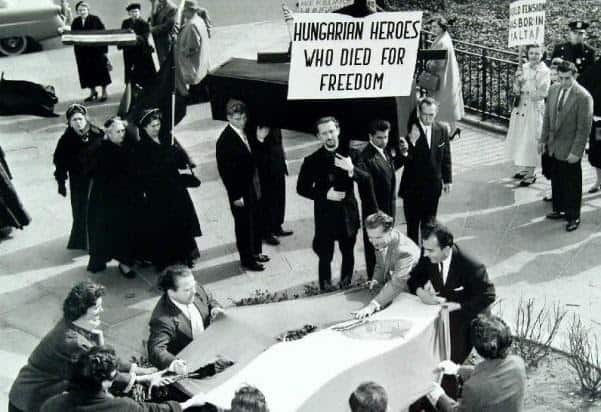 The Librarian of Congress makes the annual selections to the National Film Registry after reviewing thousands of titles nominated by the public, and announces another 25 movies that are added to the list.
The public is highly encouraged to submit a nomination for consideration. The deadline is around September 15. You can submit your recommendation through an online form HERE. Please cast your vote as soon as possible.
TORN FROM THE FLAG is specifically nominated this year because the movie commemorates the 1956 Hungarian Freedom Fight and 2021 marks the 65th anniversary of the events.
Also, TORN FROM THE FLAG has been created by a community of 20,000 people, 2,000 financial supporters, and 50 non-profits. It has become the North American Hungarian community’s largest project ever.
TORN FROM THE FLAG is now an educational tool for future generations studying at universities, colleges, and high schools. The non-profit organization, Teach with Movies, suggests the Hungarian American documentary be used for History, Political Science, Film/Cinema/Media Arts, and European Studies.
Please support TORN FROM THE FLAG by filling out the National Film Registry’s brief online nomination form HERE, so a Hungarian film become part of the United States’ cinema-history.
Thank you!
Klaudia Kovacs
Oscar Contender
Multi-Award-Winning
Film & Theater Director
www.TornFromTheFlag.com