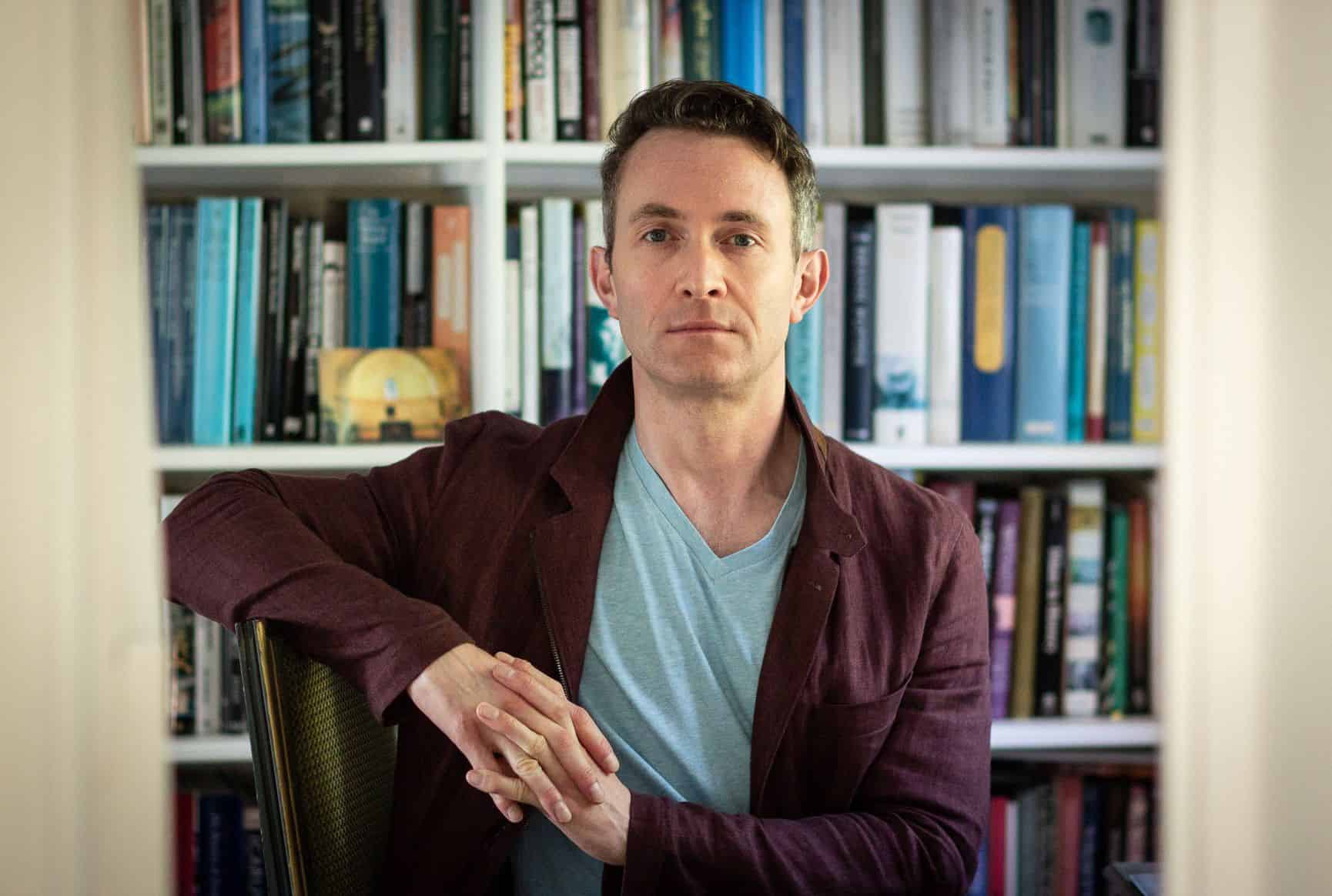 Home News Douglas Murray: History justifies Hungarian migration politics
Facebook
Twitter
WhatsApp
Viber
Email
Print
In his interview with Magyar Nemzet, Douglas Murray revealed that he finds the accusation of dictatorship against Hungary laughable. According to the political thinker, the left is becoming increasingly intolerant and is captive of extremist perspectives; conservatism can perhaps offer a viable alternative to the left’s liberalization of hard drugs and decimation of police forces. The world-renowned author finds Hungary an extraordinarily cultured and inquiring society concerned with global current events.

Douglas Murray is spending an entire month in Hungary as part of the “Patriotic Talks” online conference organized by the MCC-Danube Institute. Given his extended stay and familiarity with Hungary, Magyar Nemzet sat down with Murray to discuss the current political climate.

To start with an extreme, we asked his opinion on the continual accusations of dictatorship against Hungary—even from sources like Joe Biden. According to Murray, these claims are laughable; it is entirely obvious that Hungary holds completely free and fair elections. However, these accusations are fueled by an even deeper divide between Western and Eastern Europe, according to the British author. The dialogue between these two camps is increasingly just a screaming match.

He finds the biggest problem to be that Western Europe is incapable of accepting the fact that the East does things differently.

When asked about the validity of other criticisms of Hungary, he referred to the CEU case which he believes should have been handled better; at least, according to Murray, the government’s message should have been communicated more effectively. Although, its status as a university does not excuse it from any kind of debate regarding political conflict. On the other hand, as Murray asserted, the accusations regarding a lack of media pluralism in Hungary are entirely unfounded. He went on to describe the ridiculous expectations of the Fidesz government: essentially, the government should be funding the opposition’s media according to some sources. In any country, the topic of media always sparks a heated debate. Murray provided the United Kingdom’s media landscape as an example—even there, ownership of various media causes serious clashes.

Murray addressed the root cause of this persistent Western attitude: the left’s perspective, which incorporates very peculiar historical angles, dominates in Western media. Their approach has become increasingly “intolerant and impatient”. Most often, freedom—popularized by American liberals—is placed at the forefront.

According to Murray, though freedom is essential, if we only focus on this one value, it produces extreme results like legalizing hard drugs or downsizing police forces.

Moreover, this cult of freedom has had a large part in obscuring the meaning of equality—more specifically, its concrete versus theoretical interpretation. By this, he means that the liberal approach demands complete equality, even at the level of the individual. Murray provides the example of a migrant family: realistically, it would take an immigrant family generations to get to the same level of affluence as the average citizen—but liberals demand that immigrants immediately be guaranteed equal material conditions.

The left has stuck their head in the sand with this blind faith in freedom and equality as the only path, said the British commentator. He compares today’s situation to the political and social uncertainty in 1914. Murray believes that the left’s confidence in this way of life stems from the lazy and trivial coverage from the media.

Though Hungary is often targeted, Murray points out that other European leaders are attacked by the American liberal media as well: Emmanuel Macron and Inger Støjberg were criticized for their migration policy.

In answering the question of whether Hungary can expect sanctions from Biden’s administration, Murray predicted that because of the simplistic and baseless association of Hungary with Trump, we can most likely expect some political and economic sanctions.

Murray offered his opinions on populism and its meaning. He poses the question: “What’s the difference between a populist and a popular politician?” In his view, this term has been cemented in the meaning assigned to it by the American left-wing—but it shouldn’t be this negative. In regard to Trump and Brexit for example, these elections were celebrations of democracy; people who barely ever participated in politics came out to vote—yet they are labelled bigots and fascists by the media. As Murray puts it, these elections should have been reckonings for the left, yet there was no observable difference in their subsequent messages. The British political commentator suggests that the only way for the left to withdraw from this extremism is to introduce a constructive dialogue. He would be happiest if the normal, intelligent liberals could separate themselves from the insane. He sees that conservatives do a much better job of upholding this separation—take for example the case of Jobbik in Hungary.

The left has a much harder time drawing the line between what is acceptable and unacceptable behavior said Murray, citing a circuitous dinner conversation in the US as evidence.

The British author elaborated with the case of JK Rowling as an instance of liberal intolerance: her traditional feminist opinion on trans issues led to her excommunication from the left.

As a conservative homosexual, Douglas Murray has always been a thorn in the side of liberals’ because, according to their approach, identity should determine everything, especially political matters; minority groups like homosexuals are especially targeted. In contrast, Murray sees sexual orientation as just a fact of life—not something to be ashamed of or particularly proud of either. Meanwhile, the left uses identity politics as a tool to deepen the divide.

Since 2015, more and more countries have expressed opinions on migration in alignment with Hungary’s, for instance Macron. But the left won’t change their position anytime soon says Murray. While liberalism has the help of the media and Hollywood, conservatism, as philosopher Roger Scruton put it, “is an instinct”. The British commentator elaborated: while we know that we can do certain things, we don’t, and we stick to what we know works. Concerning economics, Murray cites the enormous and unbelievable loans that liberals accumulate; the right simply knows better and logically runs finances otherwise. In answer to the question, why conservatives always seem to be reacting to the left’s initiatives, Murray offered another Scruton insight:

conservatives are always fighting their next losing battle.

As a solution, he suggests that the right must formulate stronger visions of what makes up a good society along with alternatives to the left’s image; Murray cites Hungary’s family politics as a positive example in this category.

The British author views most religious-Christian arguments as flawed because it is entirely inaccurate to only cite one element of religion when reasoning. He brings up the frequently argued point that Jesus was an immigrant—sure, but Jesus eventually went back where he came from. This, according to Murray, is just one example of how political ideologies are falsely based on a single element of Christian teachings. In regard to the increasing Muslim population in Europe, Murray sees a variety of outcomes. While in Sweden for instance there are regular bombings, Denmark is comparatively quite peaceful. Hungary’s fate will also differ given their stance on migration; after all, the British people never voted for mass migration into their country either.

Murray believes that the preservation of Europe’s Christian identity depends on the teaching of ethical values; those who aren’t religious can live according to these rules as well. As he says,

“We have to be able to explain the value in our lifestyle, but we haven’t been able to do it yet.”

There is unlimited strength in our faith he asserts. To love your enemy is an entirely unique approach of Christianity that we have come to see as a natural way of life. He mentions colonization as a continuously attacked part of history, yet it would have never occurred to Europeans if they weren’t deeply interested in the rest of the world. This interest is present in the Hungarian nation as well, as they are an extraordinarily cultured and inquiring society, concerned with the current events of this world.

Douglas Murray sees a chance for renewal in the education of our youth; since 1968 we have been teaching bitterness where we should be teaching gratefulness.

Though we all have plenty of opportunities to be envious and spiteful, we should instead be thankful for what we have.

Douglas Murray was born in 1979 and is a British conservative author, journalist, and political thinker. His articles, which have appeared in the Spectator, Standpoint and the Wall Street Journal, garner controversy for their critical views on Islam and European migration policy. His most provocative book, The Strange Death of Europe, and his newest work, The Madness of Crowds, are available in Hungarian as well. He discusses the radical left’s hypocritical identity politics.